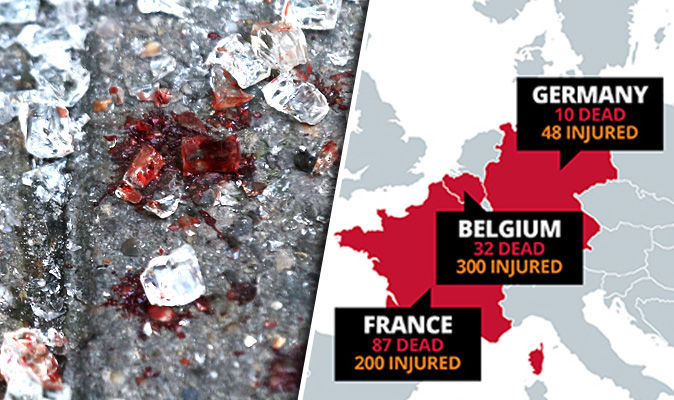 Islamist attackers prompted by calls from the Islamic State to wage jihad in the West have left the continent in shock after a series of deadly attacks.

A total of 170 people have been murdered without reason so far this year, a huge increase from the 2014 tally, when just four civilians were killed on European soil.

Last year, 267 people lost their lives, including 130 in the Paris attacks in November.

This year’s first massacre occurred in Brussels in March when 32 people were killed in two suicide bombings at the airport and on the city’s metro line.

More than 300 were also injured in the major Islamist attack in Belgium, which sparked a nationwide crackdown on suspected terrorists amid fears of planned secondary attacks on the country’s nuclear infrastructure.

This was followed on June 14 by the stabbing of a police officer and his wife in Magnanville, France.

The fanatic pledged allegiance to ISIS before launching the savage attack on the couple, whose 3-year-old son survived.

Thirteen foreigners were among the dead as well as more than 230 who were injured.

Then on July 14, 84 revelers were mowed down when an Islamist fanatic drove a heavy truck into the crowd watching the July 14 fireworks display in Nice.

More than 300 were injured in the attack, which was the first of its kind in Europe to use a vehicle rather than explosives or weapons to kill people.

The driver was Mohamed Lahouaiej-Bouhlel, a Tunisian residing in France, who was shot dead by the police.

Attention then shifted to Germany which suffered a series of attacks in rapid succession.

It all started with a 17-year-old migrant who attacked train passengers with an ax near Würzburg on July 18.

The attack was reportedly unrelated to Islamist extremism, as the killer was inspired by right-wing terrorist Anders Breivik.

On July 24, a Syrian injured 15 people by detonating an explosive device in his backpack near a music festival in Ansbach.

A day later, another Syrian refugee killed a woman in a frenzied machete attack in Reutlingen, near Stuttgart.

Back in France on Tuesday July 26, two ISIS sympathizers murdered a priest and seriously injured another after targeting a church in Normandy.