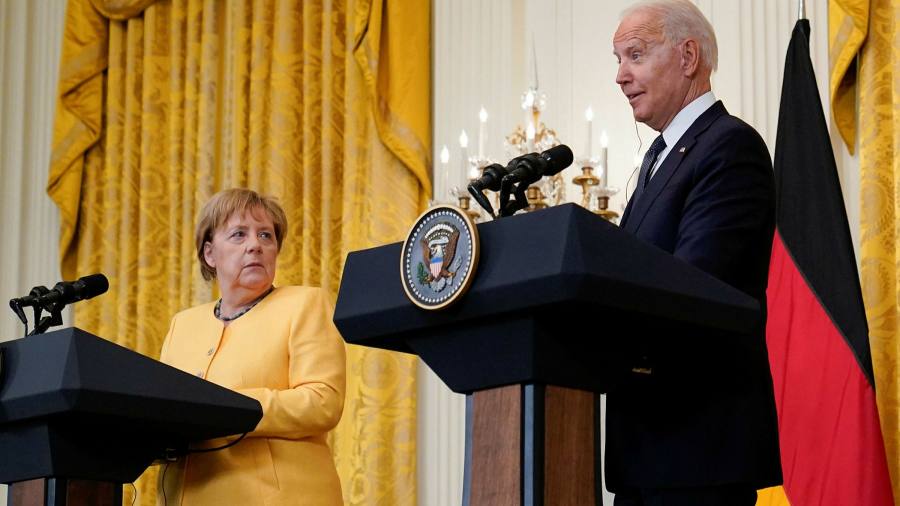 Joe Biden said he would be ready “in the next few days” to say when the United States could lift its Covid-related travel ban on European countries after being pressed by Angela Merkel.

â€œIt’s underway now. And I can answer that question for you in the next few days, â€Biden said at a press conference with Merkel, who is on her last visit to Washington as German Chancellor.

â€œI am awaiting news from our members of our Covid team as to when this should be done. And the Chancellor raised it.

The US president’s comments raised hopes for a timetable to end the pandemic-era restrictions on travel between America and European countries within the Schengen area, which have been in place since the United States. first weeks of the pandemic last year.

But US officials resisted lifting the travel ban, and Merkel acknowledged that the spread of the Delta variant was “a new challenge for both of us.”

â€œBefore such a decision, you have to think, and it must be a lasting decision. It certainly doesn’t make sense to have to take it back after just a few days. So I . . . have every confidence in the US Covid team, â€Merkel said.

Biden and Merkel said they also discussed the controversial Nord Stream 2 pipeline, which would transport Russian gas to Europe.

The near-completed German-backed pipeline would allow Russia to bypass Ukraine when sending gas to Europe. Critics say it will increase Europe’s dependence on Russian energy and make Ukraine more vulnerable to pressure from the Kremlin.

On Thursday, Merkel said that she and Biden came to “different assessments.” “Our idea is and remains that Ukraine remains a transit country for natural gas, and that Ukraine, like any other country in the world, has the right to territorial sovereignty.”

Biden said that “good friends may disagree” and that he and Merkel had discussed “practical steps” that Berlin and Washington could take together.

The leaders also spoke of a common approach to China, although there was a marked difference on the issue. While Biden lobbied for Europe to support a tougher approach to Beijing, the German political establishment feared they would be drawn into a new Cold War.

Although Merkel has consistently insisted on the need for a partnership with China, she said on Thursday that there was “a broad common understanding that China in many areas is our competitor, and trade with China must be based on on the assumption that we have a level playing field. for all of us. . . play by the same rules â€.