Impatient tourists, long lines and expensive food: how travel in Europe has changed after the pandemic

After two and a half long years of travel bans, tourism is finally back – but with less noise and more fizz.

Travelers from all over the world are flocking to popular tourist spots in Europe and beyond in droves.

It was no secret that people were eager to get back to travel, however – like airlines which can’t seem to handle the pressure – the world wasn’t quite prepared for the influx.

I recently returned home after a month-long jaunt through Europe like hundreds of thousands of other Australians.

LEARN MORE: Airbnb host offering his apartment for $110 a night – but he doesn’t even have furniture

I knew it would be a shock to the system to jump on a long-haul flight for the first time in three years. The biggest shock, however, wasn’t my rediscovery of jet lag.

That was how much these European hotspots changed. Travel etiquette is gone, everything is much more expensive than I remember, and tourists have forgotten how to behave like decent human beings.

I expected a bit of chaos. However, some tourist behavior was quite disconcerting.

Travel was always going to be a little weird after the past two years, but there are some revelations that I really wasn’t prepared for.

Of course, the lockdowns are over. But COVID cases aren’t ending the way we hoped, and there’s always a looming threat of re-infection wherever you go.

Despite this, it was incredibly rare to see tourists wearing masks in indoor spaces.

At famous tourist attractions such as the Uffizi in Florence, the Palace of Versailles in France and even Kensington Palace in London, masks were almost impossible to find.

Coughing and sputtering tourists jostled side by side at some of these spots, but people were reluctant to shield themselves from COVID-19.

Passengers crammed into public transport on the Paris Metro and London Underground even gave me weird looks when I put on my mask.

Only in Italy did I find myself subject to mandatory mask rules on public transport.

The Trenitalia rail system had officials pacing the carriages, asking people to please put on their masks.

Even the tiny shuttle that runs once an hour in the Amalfi coastal town of Positano asked locals and tourists to wear masks or they wouldn’t be allowed on board.

I found it surprising that a few hours away, in France, there is no mask mandate anywhere.

The inconsistency across the continent was confusing – but remembering how hard Italy was hit at the start of COVID-19, their strict rules made sense.

Traveler impatience is at an all-time high

During the almost three years that we have been banned from flying around the world, it seems that travelers have forgotten how to be calm and reasonable people.

At almost every major attraction in Europe, I fell victim to rude, pushy, belligerent tourists who just couldn’t wait another moment to get their hands on a bus/train/boat/museum ticket.

Particularly in Italy, there were maddening free riders at every turn. Queuing with respect seems to be a thing of the past!

In each city, I dragged my huge suitcase to the hotel from the train or bus to avoid exorbitant taxi fares.

I noticed people had no interest in getting out of the way or staying on their side of the trail. Often, pedestrians stood in the middle of the sidewalk on their phones, completely oblivious to the world around them.

There was an “every man for himself” vibe during my time abroad, and it was quite sad.

The lines are everywhere

Of course, hitting Europe during the peak of summer travel will mean lines – and lots of them.

But this year, there seemed to be a line for almost anything you could dream of doing on your vacation.

Think ice cream parlors, toilets, trains, museums, restaurants and clothing stores. I even saw a queue of 30 people to enter a Swatch store in Paris.

“The etiquette is gone, everything is much more expensive and tourists have forgotten how to behave like decent human beings”

At the Tower of London – days before the Queen died – there was a two-hour queue to see the Crown Jewels.

And the queue to just pick up your prepaid tickets at the Uffizi in Florence was incredibly long. There was simply no way to avoid them.

There are unprecedented numbers of people returning to the beautiful continent of Europe this year, so expect queues.

Prices are through the roof

Europe will always be expensive for an Australian tourist, thanks to our disappointing exchange rate.

But in 2022, everything seemed to be at least 30% more expensive than before the pandemic.

It’s just not a budget travel location if you want to enjoy local food and wine and visit all the major attractions.

In France and Malta, it was hard to find a good dinner for less than €20 ($30) a plate. Taxis in every town were basically out of the question due to skyrocketing costs (think €60 ($90) just for a few blocks).

In Positano, Italy, we were shocked to find that a restaurant enforced a two-plate minimum rule when we tried to order pizza.

We were forced to order a meager €18 ($27) Caprese salad that probably cost less than 50 cents to put together.

I understand that hospitality venues and tourist attractions are trying to recoup lost revenue due to closures and travel bans. But I was not ready to spend my money so quickly.

The reintroduction of tourism has been a bittersweet experience for locals.

I imagine they’ve relished the empty streets and lack of teeming tourists for the past two summers. But they also need tourism to keep their economy alive.

This amounts to a bizarre but understandable attitude towards travelers.

Locals love to scoff when they see another pair of starry-eyed travelers fresh off a plane dragging their suitcases down the cobbled streets.

But they want to invites you to patronize their restaurants, cafes and bars which have exorbitant rents and are in desperate need of the tourist dollar to breathe new life into their town.

There is a feeling of “we need you here but we’re not too happy about it” from many residents across France, Italy and Malta.

Maybe when the tourism boom starts to return to normal rates, they won’t feel so resentful of it all.

For a daily dose of 9Honey, Subscribe to our newsletter here. 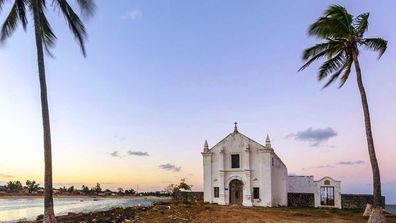 The best countries to visit if you hate tourists