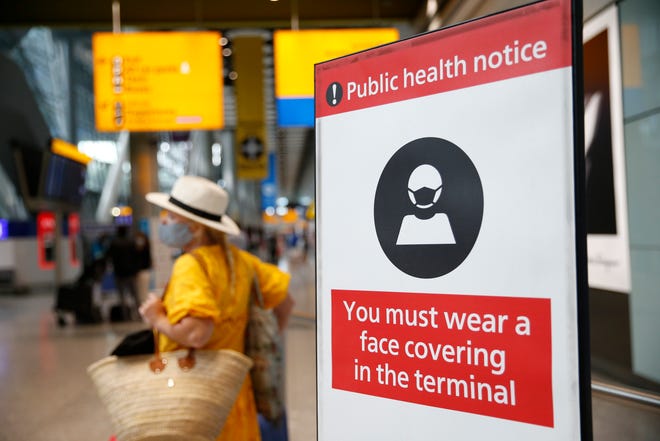 EU rolls back guidelines on US tourists as COVID surges

The European Union has removed the United States from its safe travel list and is no longer recommending its member states ease restrictions on non-essential travel for all Americans as COVID-19 cases rise.

Europe has slowly reopened to American tourists since May, when the EU said anyone fully vaccinated with an EU-approved vaccine should be allowed to visit member states for non-essential travel, but claimed that each EU country had the power to define its own policies.

In June, the EU added the United States to its safe travel list, recommending its members to gradually ease travel restrictions for all Americans and open the door to unvaccinated travellers, again leaving the ultimate decision-making to each EU country.

However, the criteria for the safe travel list include “a stable or declining trend in new COVID cases” over the previous two weeks, according to the European Council.

The updated EU guidelines come as the United States faces its fourth wave of COVID-19, driven by the highly contagious delta variant. New cases in the United States average more than 150,000 a day, dating back to late January, and hospitalizations are approaching 100,000 a day. For days, coronavirus deaths in the United States were seven times higher than they were in early July. Just over 52% of the US population is fully vaccinated, according to data from the Centers for Disease Control and Prevention.

► ‘He is really my person’:Couple reunite and get engaged after more than a year apart due to travel bans

►Traveling during the COVID delta surge:What do you want to know

This non-binding recommendation does not mean the end of travel in Europe. Vaccinated tourists should still be allowed to visit Member States that allow vaccinated visitors. In addition, each member state could decide to allow unvaccinated visitors regardless of the recommendation. The EU urges all travelers to check the rules of the specific countries they plan to visit.

The EU has also removed Israel, Kosovo, Lebanon, Montenegro and the Republic of North Macedonia from its safe travel list, which is reviewed every two weeks.

In addition to a wide range of entry requirements, European countries have varying restrictions once tourists arrive, including health passes or COVID-19 vaccine requirements to visit attractions in places like France and Italy.

The Centers for Disease Control and Prevention has increased its travel advisory levels for several countries in recent weeks, urging Americans to avoid travel to places like France, Iceland, Greece, Spain and Portugal.

Adding to the complex international travel landscape, the United States has no plans to lift travel restrictions given the rise of the delta variant, White House officials say.

The country’s current travel restrictions deny entry to people from the European Schengen area, the UK and other countries.

With travel restrictions lifted so close to the start of the summer holiday season, airlines added flights to popular destinations including Greece, Italy and France, but were unaware of how much the planes to Europe would be full this summer. Travelers book trips to Europe months or more in advance, and a big concern was that vacationers had already made other plans.

They were pleasantly surprised by the surge in bookings as soon as countries announced an easing of restrictions.

“We certainly had no precedent in our records,” Raja told an investor conference. “And I suspect we weren’t alone in this.”

Airlines had expected travel to Europe to remain strong beyond the traditional summer season given pent-up demand, but surging cases and new restrictions like those the EU is implementing put a damper on this forecast.

Raja said Wednesday that American’s overall revenue in August was below expectations due to a slowdown in bookings and increased trip cancellations due to concerns over the delta variant.

4 Common Bill Consolidation Mistakes And How To Avoid Them