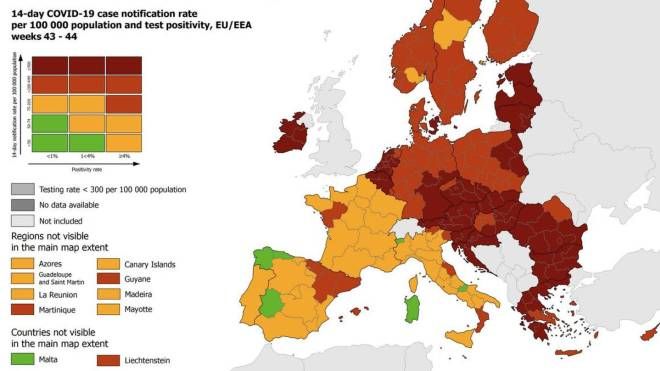 Italy continues to turn yellow more and more European map of the Covid-19 situation updated weekly by ECDC, European Center for Disease Control and Prevention, and released today. In green, the lowest risk level, there are only 3 regions left: Sardinia, Molise and Aosta Valley. While I am in red already 3 regions – Calabria, Friuli-Venezia Giulia and Marche – plus the Autonomous Province of Bolzano.

In the peninsula region in yellow – next level to green in the Covid risk scale – there is the autonomous province of Trento and the remaining regions: Veneto, Lombardy, Piedmont, Liguria, Emilia-Romagna, Tuscany, Umbria, Lazio, Abruzzo, Campania, Apulia, Basilicata and Sicily. This therefore remains the predominant color in the Ecdc ranking, which is based on the notifications of positive cases per 100,000 inhabitants, combined with the percentage of positive tests on the total number of tests carried out, without taking into account the vaccination rate.

The updated maps are live!

These cards aim to support the @EUCouncil recommendation on measures relating to travel in the EU during # COVID-19[FEMALE[FEMININE pandemic.

TO European level we almost observe it a flaw: all the eastern part of Italy is in dark red or red. In detail, Austria, Slovenia, Croatia and Bulgaria are all in dark red, as are Lithuania, Estonia and Latvia. Other central and northeastern block states. Small yellow areas remain only in Sweden and Norway. On the other hand, the countries to the west and north-west of Italy have a predominance of yellow: for example France, which has a single small area in red, Portugal (entirely in yellow) and Spain which , in addition to the predominantly yellow has green and red areas. Ireland stands out, totally in dark red.

Young Ghanaians in Europe travel a lot “at home”: why …

Redrawing the map of Europe… with blood