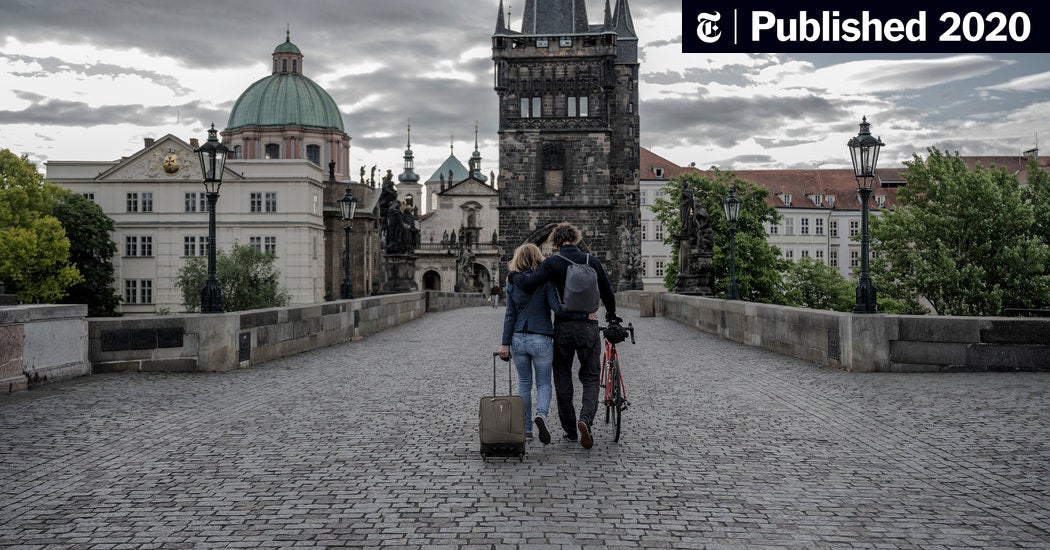 LONDON – Every morning, Marisa Lobato wakes up and checks the news to see if travel restrictions have changed.

She lives in SÃ£o Paulo, Brazil, and her fiance, Horst Schlereth, is in Germany. Before the coronavirus put everything on hold, Ms Lobato had planned to travel to Germany this spring to prepare for their wedding. Now their daily calls are filled with worries about when they will reunite.

â€œWe feel completely stuck in this situation,â€ she said. â€œNormally I don’t cry in front of him, but I cry alone. It really is a horrible feeling.

The couple are among a number of separated and unmarried couples who have taken action on social media to change European Union travel restrictions, using the hashtag #LoveIsNotTourism and # LoveIsEssential. Unlike most married people, they do not have the right to enter the European Union to find their partners.

Now the European Commission, the bloc’s executive arm, is backing the cause, urging member states to exempt single people with partners in Europe from the travel ban. But only Denmark and Sweden have adopted any of the recommendations, and couples say even border guards in member states are confused about the regulations.

Late last month, the European Union announced plans to reopen travel on July 1 to visitors from 15 countries, in a bid to save the bloc’s peak tourist season. The United States, Brazil and Russia, among other countries, were notably excluded.

Some of the countries that are still banned are nowhere near meeting EU requirements to control the coronavirus before they can resume travel, and may need weeks, months or more to meet those standards.

Ylva Johansson, European Commissioner for Home Affairs, is a strong advocate of separated couples. His office said there were no official statistics on the number of people affected, but a Facebook support group for couples separated during the pandemic has approximately 3,000 members.

While the committee recommended that member countries allow unmarried couples to reunite, Ms. Johansson said, it is up to each country to set its own policy.

â€œFor me, it’s important that you have as broad a definition as possible of a couple who are truly a real couple,â€ she said. “But the exact definition of this is for the member states to decide.”

Many who want this definition relaxed have highlighted the approach Denmark is taking this month – which allows visitors who can prove they have a lasting relationship and who test negative for Covid-19 to enter the country – as an example for the other nations of the bloc. .

Several Members of the European Parliament have written letters calling on other European leaders to implement more open policies, and dozens signed an open letter to Horst Seehofer, the German Minister of the Interior, urging him to recognize unmarried couples.

“The 21st century family goes beyond formal marriage,” Moritz KÃ¶rner, Member of the European Parliament from Germany, wrote to Italian Prime Minister Giuseppe Conte, in one of the many open letters he sent to leaders. Europeans.

Until the virus changed everything, Miriam Paffen, who is German, and her partner, Javier, who is Argentinian and a resident of Brazil, took transatlantic trips to spend time together. Their last visit was in December.

â€œIn fact, we have no idea when we can meet again,â€ Ms. Paffen said.

Ryann McQuaid, an American living in New York, and his partner Hannah Maes, who is Belgian and lives in Brussels, are in a long-term relationship, but for a year it has been at a distance. They usually saw each other every three months before blockages derailed their plans.

They frantically called out to officials, looking for answers as to when – and if – they can be together in Brussels again.

â€œEveryone we come into contact with will point us to another manager,â€ Ms. McQuaid said. â€œWe’ve never had to justify our relationship in this sense before. So it’s also very frustrating.

Border restrictions in countries outside of Europe have also separated unmarried couples during the pandemic. Couples in the United States and Canada have found themselves separated for months by the closure of their countries’ shared border.

A visa delay prevented Morgan Bretnall, who is based in Britain, from traveling to the United States to be with his fiancee, Stacey, an American currently living in Puerto Rico.

While American travelers can technically travel to Britain, they must enter a mandatory two-week quarantine, which Ms Bretnall says is unachievable. The couple got engaged in December.

â€œAt the moment our life is on hold,â€ Ms. Bretnall said.

In Europe, some married couples were only recently reunited after months of separation.

Flavia Negwer, a German, and her American husband, Jeff Wong, have spent months wondering how to get Mr. Wong back to Germany despite travel restrictions. He had traveled to the New York area to visit family and prepare for an upcoming move to the United States this fall.

But her few weeks’ trip turned into months when Europe banned non-essential travelers, leaving Mr Wong and Ms Negwer unsure when they might meet again. Adding to the uncertainty, his German visa expired while he was stranded in the United States.

Last week, after the European Union’s new travel directives came into effect, they called on embassies, EU officials and even German border police to better understand the rules before Mr Wong tried. to enter the country.

They did not get clear answers, but he decided to try to return to Germany anyway.

â€œI felt like I understood EU directives and rules better than the officials we spoke to at the border,â€ Wong said.

He was eventually allowed entry after showing the expired visa which indicated he had lived and worked in Germany for years.

German border police said in a statement that they have clear guidelines and in fact are staffing a special center that reviews and decides on unusual cases such as married couples like Mr Wong and Ms Negwer.

The couple said that in the push to reopen the bloc, driven in large part by an economic agenda, separated couples have been forgotten.

â€œThe whole of the EU is trying to reopen for tourism, for economic reasons, but on the other hand, they are also completely ignoring these couples,â€ Wong said.

Ms Lobato, who is estranged from her German fiancee, said that while she understands the seriousness of public health problems, people’s right to see their partners must be taken into account.

â€œWe all know this virus is going to be here for a long time,â€ she said. “So it’s not possible for us to go a year or a year and a half without each other.”

EU Borders Remain Closed to Americans and Others – That’s Why