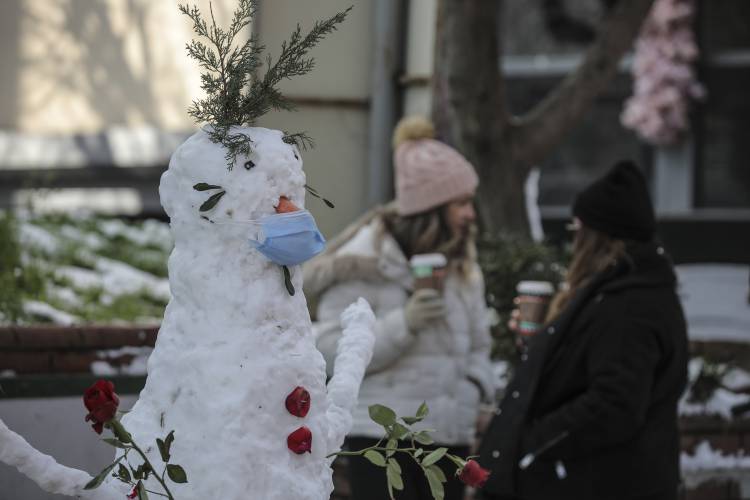 In Switzerland, a skier who was buried by an avalanche this weekend died in hospital from his injuries, authorities said on Monday.

The country had issued avalanche warnings several days earlier after heavy snowfall. Officials said the skier and his two companions were buried by an avalanche while skiing off marked pistes in the Gstaad region on Sunday. One man freed himself from the snow and then cleared one of the others, but the third could only be found by rescue teams, who arrived later.

Temperatures dropped to minus 18 degrees Fahrenheit in parts of Poland overnight, the coldest night in 11 years. Many trains were delayed on Monday after the tracks at two Warsaw stations cracked.

Along with the cold, a spike in smog occurred in Warsaw and other parts of Poland, as the cold led to increased burning of coal for heating. Air pollution levels were so high in Warsaw that city officials urged people to stay indoors.

Just across the southwestern border from Poland, the Czech Republic experienced its coldest night this year with temperatures dropping below minus 4 degrees Fahrenheit in many places.

The lowest temperature – minus 16 degrees Fahrenheit – was recorded Monday in Orlicke Zahori, a mountainous village 160 km east of Prague near the Polish border, according to the Czech Hydrometeorological Institute.

Freezing weather is expected to be replaced by heavy snowfall in the northeast of the Czech Republic, the institute said.

Winter weather and freezing temperatures were reported in the Balkans, which created power supply problems in Serbia and brought snow even to Croatian islands in the Adriatic Sea.

In eastern Albania, temperatures dropped to minus 9 degrees in Peshkopi, 70 miles east of the capital, Tirana. The freeze caused water pipes to freeze and created unsafe driving conditions. Icy roads in the town of Pogradec prevented firefighters from arriving in time on a house fire in which a man died early Monday.

In Istanbul, traffic was interrupted by the blanket of snow covering the city, with cars stuck or skidding on the roads.

In Germany, fresh snow, slippery roads and fallen trees caused several car accidents on Sunday and overnight, the dpa news agency reported. A driver has died in southwestern Germany after his car hit a mound of snow.

The northern region also experienced snowy and sub-freezing temperatures, with the coldest temperatures predictably recorded in the Arctic. The Norwegian Meteorological Institute tweeted a tongue-in-cheek message on Monday saying, “We encourage all knitting enthusiasts to send woolen clothes to their friends in the north.”

In Denmark, police on Sunday found 17 naked people bathing in ice in a lake near Roskilde, 25 miles west of Copenhagen. All members of the group, aged 26 to 51, were previously charged with breaching pandemic restrictions limiting gatherings to five people. Police said they would all be fined, which is $405 for first-time offenders.